Expanding from earlier waves videos, I photoshopped some digital images to combine the waves and women’s homes.

The waves appear on the wall, the door, the floor and the ceiling, where two different spaces appears on the same plane to form unrealistic space, and created visual illusions of the waves invading into the women’s homes (outside becomes part of the inside). 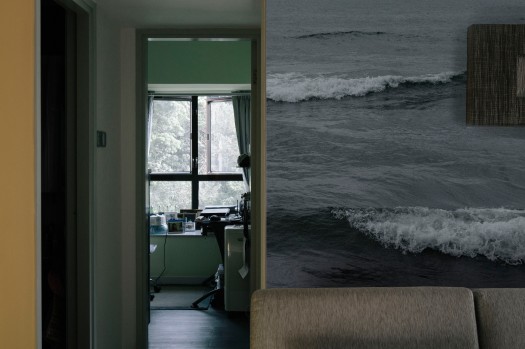 The mindmap reminded me of Wang AnYi’s writing in her work The Song of Everlasting Sorrow.  The writing describes the smell of rumours – it is dark, smells like a woman’s home, and lingers in the alleys.  I feel strongly about this writing, it possesses the essence of the ambience I want to create.  So I attempted to develop a video from the writing.

With an intention to create a flow between internal thoughts and the external world, the video is composed of a series of moving images displayed in three rectangles.  Sometimes the internal and external (with different colours) are displayed in parallel to create space, whereas the sound is a collage of samples from the city – sound of traffic and people talking – an attempt to create another space for the work.